How to Write a Meeting Minutes (Plus Samples)

For the overwhelming majority of the population the concept of meeting minutes is a mystery. What are they, why do they exist, what format is the most effective? These are the most asked questions when the topic of meeting minutes is broached. Simply put these are detailed notes of the on-goings and subjects discussed in meetings of clubs, committees, employees, directors or what have you. Its name is actually a misnomer, because contrary to popular belief the brief is not a minute by minute report. However, it does capture the important elements of dialogue based meeting between several parties. In the end, meeting minutes is not only a method of recording the conversation that occurred, but it allows members and participants who were unable to attend the meeting to peruse the information that was shared or unearthed.

Like most other writing assignments, and indeed like most other tasks in life, meeting minutes are made easier by taking what seems like a large and nearly impossible task and breaking it up into bite-sized pieces that are easier to manage and execute. When it comes to meeting minutes the first step is always to collaborate with the Chair or Secretary (or whoever sets the agenda) to ensure that all parts of the meeting are taken note of and that no piece of information is left behind. For the minutes taker, the production of an outline is key the successful noting and writing of meeting minutes.

Then theres the actual recording of the meeting. It is essential to capture key pieces of information accurately. In this case, coming up with a checklist beforehand is very useful. The date and time of the meeting should be noted to set chronology. All participants and speakers should be clearly identified, as well as decisions made and actions that still need to be taken. The minutes taker should not be afraid to ask for clarification. At this point they are acting almost like historian and should pursue the task with professionalism and accuracy. In contrast, the writer should also be aware of what pieces of information to record and which can be ignored. It is impossible to write down every single word, sigh, argument and rebuttal made in the meeting, so don’t even try. Instead, capture the information and data that have bearing and significance towards the advancement of the subject.

This may surprise some, but the conclusion of the meeting marks the halfway point towards the completion of the meeting minutes. Because once the note taking has ended, the writing can commence. Begin by explaining who was present as well as their roles. Then quickly list the topics covered in the meeting. Each topic will be discussed in detail during the following paragraphs in which each topic will be described thoroughly as well as the decision made or, if need be, any actions that still need to be taken. In the case of deliberations or debates, list the item in contention, the various sides of the argument, and finally the arguments themselves and who made them. The key is to remain objective, and to remember that it is not a gossip column, so the focus should be more on the arguments, and not who made them. This is a business document and as such the writers personal observations, opinions and biases should strictly be left out. Finally, if any external resources were shared it should be included in an appendix and referenced in the meeting minutes form.

Distributing the meeting minutes to all members of the group, regardless whether they were present or not, is also a duty of the writer. Just make sure to pass it through the Chair or lead first, just in case they needed to make an edit, correction or amendment. There are various ways to share the minutes. Everything from traditional snail mail, to an email and more commonly through the use of cloud sharing systems. There are a plethora of these services as well as note taking tools available throughout the internet. Some of them do need to be paid for, but a surprising amount if absolutely free. It is only a matter of deciding on a tool that all parties feel comfortable using and sharing information on.

As previously mentioned, meeting minutes are records of conversations, and like all records they should be properly catalogued and stored. Boards and committees often need to have these minutes filed as they may need to be referenced in the future. Also they are, for all intents and purposes, historical data from which future decisions can be traced from. Like distribution, there are numerous tools, systems, software and programs that can be used for filing and storage. The most logical way to do this would be to print a single hard-copy to be stored for a maximum of 7 years (for many countries this is the minimum amount of time that a governing body requires you to keep financial records). A soft-copy is then uploaded to a cloud-based storage system on the Internet. This solution should have considerable amount of security as well as redundant systems with high availability, so that should one system fail on the providers end, the document can still be accessed. 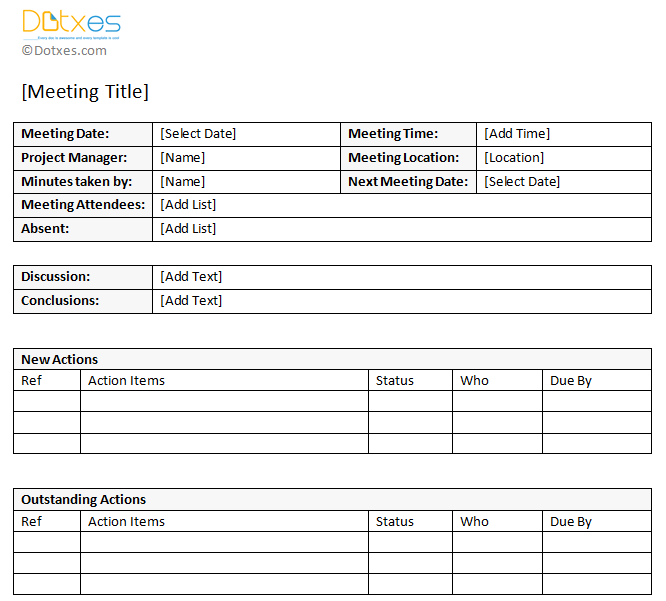